Jon Burns has been chosen as a Welsh Conservative candidate to stand for the office of Police and Crime Commissioner in Dyfed-Powys. Following the Covid-19 pandemic, elections for this position have been postponed by one year and are now scheduled to be held on Thursday 6th May 2021.

The Dyfed-Powys Police Force covers the largest geographical area in Wales and England, spanning the four counties of Carmarthenshire, Ceredigion, Pembrokeshire and Powys.

A former Welsh Conservative City and County Councillor, Jon has worked in the Home Office for Her Majesty's Prison Inspectorate, and later, the Welsh Parliament. He brings an insight to the inner workings of the UK's criminal justice system, including understanding and breaking the cycle of re-offending, the issues faced by women and young offenders inside the prison system, as well as experience of combatting the scourge of drugs and the pivotal role they play in recidivism.

Born in Manchester, and married to Katy, Jon has lived in Wales for 15 years. He has served as a school governor and has worked with several major health charities and companies including the Alzheimer's Society, the British Heart Foundation and Cancer Research on development of new medicines and technologies.

Jon's priority as a Police and Crime Commissioner for Dyfed-Powys is to put public safety at the very heart of the Force's objectives, focussing on the insidious "county lines" networks which blight all four counties across Dyfed Powys. The primary role of the Police and Crime Commissioner is to be the public's voice, ensuring that everyone from the Chief Constable is putting the communities they represent front and centre of their work. 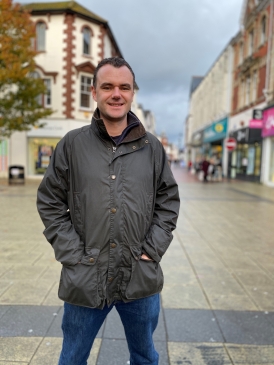