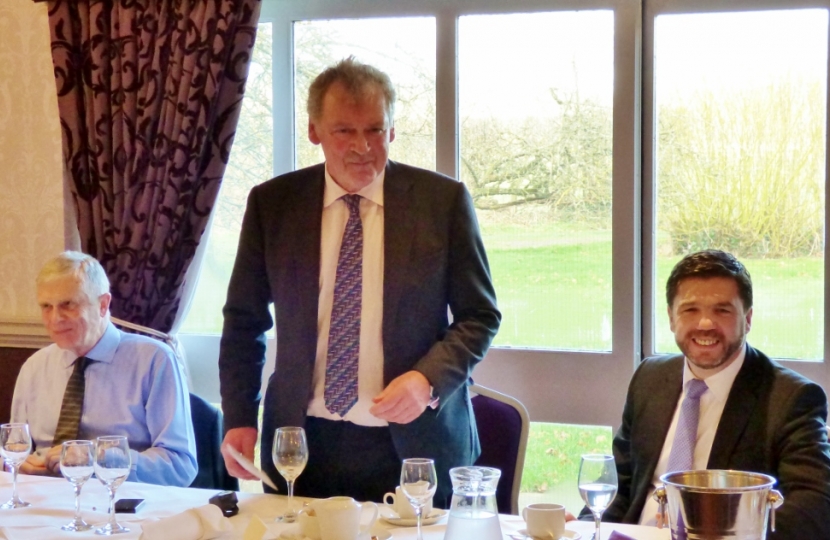 Stephen Crabb MP, Secretary of State for Wales, was warmly welcomed to Montgomeryshire on Saturday, where he was the Guest Speaker at a New Year celebration at Maesmawr Hall.

Stephen, who is the MP for Preseli Pembrokshire and was promoted to the cabinet last summer, joined Glyn Davies MP and Cllr Aled Davies at the lunch, which attracted over 70 guests, including many non members.

Stephen praised Glyn for his work in the constituency and in Parliament, telling guests that Glyn's honesty, sincerety and work representing his constituents meant he was respected by MPs of all parties in Westminster. The Secretary of State also highlighted the great economic success in Montgomeryshire, where unemployment in December stood at just 553 people.

Glyn Davies said that he was 'very pleased' to have been able to welcome Stephen to Montgomeryshire:

"Stephen is a hardworking Secretary of State who has built bridges between Westminster and Cardiff Bay. His down to earth approach has gained him a lot of respect from many who wouldn't normally consider themselves Conservative. I am very pleased to have seen to many non members attending a Conservative event. Everybody was relaxed and friendly. I'm looking forward to more events in the coming months."