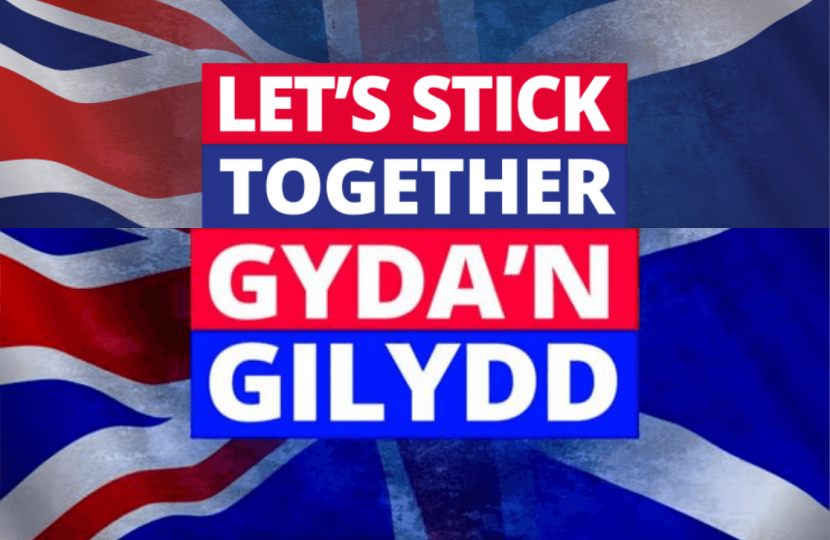 Glyn Davies, Conservative MP for Montgomeryshire, called on all Welsh citizens to stand unified against the breakup of the United Kingdom and warned of the negative effects on Wales in the event of a Scottish departure at Prime Minister’s Questions (10/09/14)

“Mr Speaker a vote next week in favour of an independent Scotland will have major implications for Wales.

Does my Right Honourable Friend agree with me that my fellow Welsh citizens who care about our Welsh nation should be hoping and praying for the rejection of breakup of the United Kingdom?”

The question, which was put to Leader of the House William Hague as Prime Minister David Cameron was campaigning in Scotland, received cheers and support from across the House. Speaking after the session, Mr Davies said:

"This is the most important vote in Britain of my lifetime. The results of a ‘yes’ vote will have a hugely negative effect on the whole of the UK, including Wales. Scotland and Wales set out on the devolution journey together, but we represent a strong Celtic voice and influence in a union of nations which has lasted for over three hundred years.

“If Scotland decides to leave, this union will be weaker and the voice of Wales will be diminished. I was grateful to be supported by Members from all parties in the House. The decision which confronts the Scottish people goes beyond politics. It will fundamentally alter this country.

“There are of course practical and economic reasons to be made against this split. But what is vitally important to me is that the Scottish people stay because they want to and because they know that we in Wales want them to. The UK still plays a leading role on the world stage. United, England, Scotland, Wales and Northern Ireland can continue as global players at the top table.”